Bienville Parish is an agricultural and timber-producing parish in rural northwestern Louisiana. It is best known as the site of the capture and killing of outlaws Bonnie Parker and Clyde Barrow in 1934. Beginning in the 1880s, Bienville Parish profited from the burgeoning north Louisiana lumber trade.  Cotton growing and the production of cotton byproducts were other important local industries. In 1893, the parish seat was moved from Sparta to Arcadia after Sparta was bypassed by the Vicksburg, Shreveport and Pacific Railroad. Arcadia was briefly the home of two institutions of higher education, the Arcadia Male and Female College and the E. and A. Seminary.  The population of Bienville Parish peaked around 1910 with 21,766 residents, but declined in the following decade as a result of depleted timber resources and migration of African Americans to urban areas and the North.

Although no early copies of the paper are known to have survived, publication of the Bienville Democrat appears to have begun in 1904. By 1919 it was being edited by Seaborn Arledge Cook (1892-1971), who remained at the helm until 1928 when he moved to Oklahoma. A typical country newspaper, the six-page weekly reported social and personal news from towns throughout Bienville Parish, including Arcadia, Gibsland, Ringgold, Sparta, Saline, Lawhon, and Liberty Hill. The north Louisiana oil boom of the early twentieth century is well documented, as is the progress of the Good Roads movement throughout the region. Agriculture was covered in a “Farm and Stock News” column, which reported on topics such as the growth of the local farm bureau and the advancement of agricultural education. Household tips and recipes were printed for women readers, together with a fashion column. 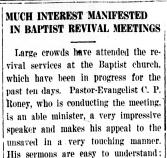 News of local Methodist and Baptist churches is combined with announcements of religious revivals, traveling preachers, and visiting orators affiliated with the Chautauqua adult education movement. Also of interest is news related to the aftereffects of World War I, including returning soldiers, the sale of war bonds, and the activities of the American Red Cross.