Incorporated in 1914, Bogalusa is one of the youngest towns in Louisiana. It was founded by Frank Henry Goodyear and Charles Waterhouse Goodyear, lumber barons of Buffalo, New York. In 1906, the Goodyears formed the Great Southern Lumber Company to harvest the rich and largely untapped timber resources of southeastern Louisiana and southern Mississippi. They also ordered the construction of the ninety-mile New Orleans Great Northern Railroad to provide access to this region and transportation for processed timber. Known as “Magic City” because of its rapid growth, Bogalusa had about 20,000 residents by 1920 and promoted itself as one of the most progressive cities in the South. The rapid depletion of the area’s timber resources, however, led to the closing of the Great Southern mill in 1938 and the town’s subsequent decline. 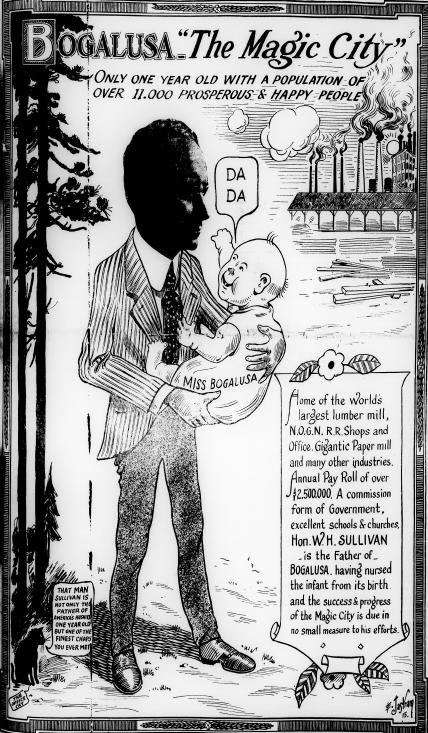 The Bogalusa Enterprise, an eight-page independent weekly, was founded and edited Clyde S. Moss (1880-1949). Moss’s career began at his father’s newspaper office in Linton, Indiana. He later worked as a journalist in Tennessee, Texas, New Orleans, and Baton Rouge before moving to Bogalusa in 1914. A tireless booster of his adopted town, Moss reported on Bogalusa’s growth and the ups and downs of the timber trade. Discussions of significant social and economic issues included the debate over prohibition in Louisiana, the need to diversify agriculture, and the growth of the Good Roads movement. News briefs from other towns of Washington Parish are available, including Franklinton, Varnado, Angie, Rio, Bush, and Zona. There are frequent announcements of local clubs, fraternal lodges, and the Bogalusa YMCA, a cultural center that hosted musical performances, literary events, and traveling lecturers. Education was discussed at length in a series of articles by Professor J. F. Peters, founder of the Bogalusa public school system. Bogalusa was one of the earliest small towns in Louisiana to acquire a movie theater, which advertised its schedule of shows in the Enterprise. Also of interest is the paper’s special “anniversary number” of July 1, 1915. Commemorating Bogalusa’s first year as an incorporated town, this issue contains biographical sketches of prominent town leaders and businessmen as well as photographs of public buildings, residential neighborhoods, lumber yards and paper mills.