The Carrollton Sun was the official journal of Jefferson Parish, Louisiana. Extending from the southern shore of Lake Pontchartrain to the former resort community of Grand Isle on the Gulf of Mexico, Jefferson Parish now contains some of New Orleans’ largest suburbs. In the nineteenth century, however, it consisted mostly of sugar plantations and unsettled coastal marsh. Carrollton, the parish’s former seat, was laid out in 1833 at a bend in the Mississippi River a few miles west of New Orleans. Its ethnic makeup was predominantly Anglo-American, Irish, and German. In 1874, Carrollton was annexed by Orleans Parish and is now part of the affluent neighborhood known as Uptown New Orleans.

The editor of the Sun was M. G. Davis (1800-1865). A native of Philadelphia, Davis worked as a manager at the New Orleans Picayune in the early 1840s. In 1845, he left the Picayune and co-founded the Daily Delta, a Democratic newspaper, with other members of the Picayune staff. Following a factional dispute in 1849, the Daily Delta split into two new papers. One of these, the Daily True Delta, Davis published until 1853 in partnership with John Maginnis. By about 1858, Davis had moved to Jefferson Parish and begun publishing the Sun. Its earliest extant issue (vol. 3, no. 2) is dated June 30, 1860. 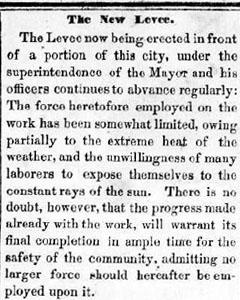 Published twice a week under the motto “The ‘Sun’ Shines for All,” the first page of the four-page paper was usually devoted to fiction, poetry, and miscellaneous world news. Interior pages contained state and local briefs, reports from throughout the South (with a focus on the neighboring states of Texas, Arkansas and Mississippi), proceedings of the town council and police jury (the governing body of the parish, akin to county councils in other states), city and parish ordinances, and announcements of sheriff’s sales and public auctions. The Sun offered a small amount of commentary on slavery and abolition, and its commercial section occasionally carried notices for runaway slaves.

Davis initially opposed secession and favored compromise on the issue of slavery, supporting pro-Union Democrat Stephen Douglas in the election of 1860. The Federal attack on Fort Sumter appears to have altered Davis’ views, and by the spring of 1861, he had come out in full support of secession and was using the Sun to call attention to the need for large-scale military enlistment and improved defenses of New Orleans and the Mississippi River.