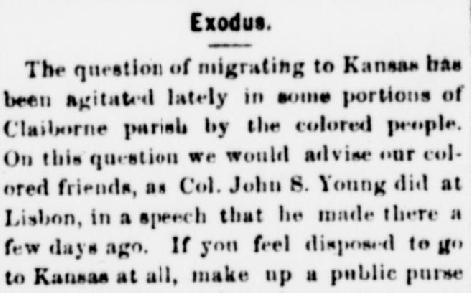 Founded in the wake of the highly contentious presidential election of 1876, the Claiborne Guardian was a Democratic newspaper that covered many of the leading political issues of the post-Reconstruction era. Immigration to north Louisiana was a frequent topic of discussion, as was migration out of the region, particularly the so-called Exodus of 1879, in which large numbers of African Americans left Louisiana in search of a better life in Kansas. Other subjects discussed included the construction of roads and railroads, the organization of farmers’ unions, and the need to diversify agriculture (in the 1870s cotton was still Claiborne Parish’s chief industry, but lumbering and timber processing was becoming increasingly important). Reports on the advancement of rural education were combined with news on the activities of two local educational institutions, Homer Male College and Homer Female College, founded separately in the 1850s and combined into a single college in 1885. Also available is news of churches, clubs, and societies, and brief reports from small towns throughout Claiborne Parish, including Haynesville, Lisbon, Dykesville, Langston, and Arizona (site of a large cotton factory). News from south Arkansas and northeast Texas was occasionally reported as well. As the official organ of Claiborne Parish, the Claiborne Guardian published the minutes of the parish police jury, the governing body of the parish. It also carried the proceedings of the Homer town council.

Associate editor Oscar P. Ogilvie (1864-1927) purchased John Phipps’ share of the business in 1889 and became full owner in June 1890, whereupon he consolidated the paper with the late Benjamin Harrison’s Louisiana Weekly Journal to form the Guardian-Journal.