In December 1856, George A. Pike’s Morning Comet and George C. McWhorter’s Baton Rouge Daily Gazette were consolidated to form the Daily Gazette and Comet, which Pike edited with Rev. William H. Crenshaw. The brother of prominent Baton Rouge landowner and businessman William S. Pike, George Pike had been an outspoken member of the anti-Catholic, nativist Know-Nothing Party, which he promoted as editor of the Morning Comet and its predecessor the Daily Comet. By 1856, the party had split over the issue of slavery, whereupon Pike, now editor of the Daily Gazette and Comet, shifted his focus to the growing sectional crisis between North and South. 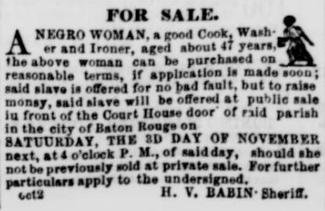 Pike opposed southern secession and called for compromise on the issue of slavery. In the presidential election of 1860, he supported Constitutional Union Party candidate John Bell of Tennessee and his running mate Edward Everett of Massachusetts. However, he also spoke favorably of pro-Union Democrat Stephen A. Douglas of Illinois. Louisiana secessionists whom Pike criticized included Senator John Slidell and Governor Thomas Overton Moore. In the months leading up to the election, the Daily Gazette and Comet reported on the activities of Unionists in and around Baton Rouge and on meetings of Bell and Douglas clubs. (The city ultimately cast the majority of its votes for Bell.) After the election, the paper reported local and regional responses to Lincoln’s victory. Pike himself disagreed with Republican ideology in regard to slavery but considered Lincoln to have been fairly elected and encouraged southerners to adopt a “wait and see” attitude.

Published Tuesday through Saturday in four pages, the Daily Gazette and Comet consisted primarily of advertisements and thus helps document Baton Rouge’s commercial life on the eve of the Civil War. Although the city’s population was then only about 5,500, it was one of the most important shipping centers on the lower Mississippi River and had served as Louisiana’s capital of for eleven years. In addition to business news, Pike reported on sessions of the state legislature. Also of interest is news related to other local institutions, including the Louisiana Institution for the Deaf, Dumb and Blind and the newly founded Louisiana Historical Society, which Pike served as secretary.

Publication of the Daily Gazette and Comet was suspended for about two months during the Civil War and appears to have ceased entirely by war’s end in favor of a weekly edition with which it had been published concurrently since 1856.