On September 18, 1865, George William McCranie (1838-1895), a former Confederate army captain, published the first issue of the Weekly Telegraph in Monroe, Louisiana. Located along the Ouachita River in the fertile farm country of northeast Louisiana, Monroe (the seat of Ouachita Parish) was then in a period of growth following its connection to Vicksburg, Mississippi, a key cotton port, by rail in 1855, and then to Shreveport and areas farther west in 1860. Cotton and timber formed the basis of the local economy. 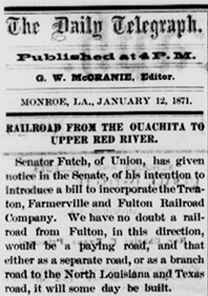 McCranie expanded the Weekly Telegraph from two pages to four in December 1865 and changed its title to the Ouachita Telegraph. Publication of an additional four-page daily version, the Daily Telegraph, commenced in 1870. As Democratic newspapers, the Ouachita Telegraph and Daily Telegraph opposed Radical Republican rule and the empowerment of black voters in Louisiana. In the months leading up to the presidential election of 1868, McCranie published a series of original cartoons in the Ouachita Telegraph ridiculing presidential candidate Ulysses S. Grant, Republican officeholders, and their supporters, especially African Americans. He frequently spoke out against the most prominent Republican newspaper in north Louisiana, William Jasper Blackburn’s Homer Iliad. In July 1868, McCranie announced that he would publish a Democratic campaign paper, the Bastrop Saxon, in neighboring Morehouse Parish. He then briefly turned over editorship of the Ouachita Telegraph to Samuel D. McEnery (1837-1910), a Catholic and future governor of Louisiana, while McCranie assisted with the Democratic campaign. McCranie was also on close terms with and often published articles about S. D. McEnery’s brother John McEnery, a controversial Reconstruction-era politician.

Although the Ouachita Telegraph and Daily Telegraph were primarily concerned with politics, other topics reported included immigration to north Louisiana and Texas, the cotton trade, railroads, bridge construction, river improvements, and the growth of local schools and academies. 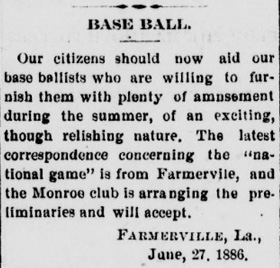 McCranie viewed the temperance movement with skepticism, but he faithfully reported developments in this field, both local and national. The Ouachita Telegraph contained many articles related to former Confederate soldiers and political leaders. It also reported at some length on the so-called Exodus of 1879, in which large numbers of African Americans left Louisiana in search of a better life in Kansas. Coverage of religious issues related mostly to the Baptist church, though McCranie occasionally reported the activities of other denominations, including Monroe’s small Jewish community, some members of which advertised heavily in his newspapers.

McCranie served as the first president of the Louisiana Press Association when it was founded in 1880. In July 1886, Charles Henry Trousdale (1858-1921) succeeded McCranie as editor of the Ouachita Telegraph and terminated publication of the Daily Telegraph. Trousdale expanded the paper’s fiction and “society” sections and began publishing more articles on agricultural and household topics. In matters of politics, Trousdale largely maintained McCranie’s racist views. The last issue of the Ouachita Telegraph was published on December 28, 1889, after which it was consolidated with the Monroe Bulletin to form the Telegraph-Bulletin.