Bradburn, a native of Tennessee, began his newspaper career as an apprentice at the National Banner and Nashville Daily Advertiser. He ran away from this position in 1832, eventually joining the navy. In 1842, he purchased the Ibervillian from John Dutton in Iberville Parish, Louisiana, a wealthy parish known for its sugar plantations. By the terms of the sale, Bradburn was required to supply present subscribers until 1848. In 1844, having unsuccessfully attempted to claim the Mexican estate of his late uncle Juan Davis Bradburn (a general in the Mexican army), Bradburn began publishing the La Grange Intelligencer in what was then the Republic of Texas. Three years later, he returned to Louisiana and edited several New Orleans newspapers before settling permanently in Iberville Parish, where he became the managing editor of the Southern Sentinel in 1848.

Joseph Balch was born in Lancaster, New Hampshire, and came to Louisiana around 1845 as a teacher. In 1852 he founded the Iberville Gazette with Peter Elmore Jennings (b. ca. 1823), a New Yorker who served as mayor and postmaster of Plaquemine. Jennings replaced Balch at the Gazette and Sentinel in 1859 but sold his share of the business in August 1860. Bradburn, Balch, and Jennings were all Catholics. In 1860, Bradburn owned four slaves, Balch five. 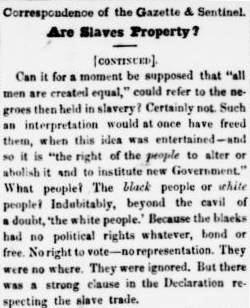 Slavery was the Gazette and Sentinel’s most frequent topic of debate. Early issues discuss the Kansas-Nebraska Act, popular sovereignty, and the activities of southern filibusters in Central America. The paper’s editors strongly opposed Democratic senator Stephen A. Douglas of Illinois, calling him a “traitor” who was “playing into the hands of abolitionists.” There are a few reports on the Lincoln-Douglas debates of 1858. Notices for runaway slaves accompany discussions of slaves as property and calls for imposing restrictions on free people of color. In the election year of 1860, the paper supported secession and endorsed Democratic presidential candidate John C. Breckinridge, who carried Iberville Parish in the fall election. Frequent supplements featured speeches and sketches of Democratic candidates, news of public meetings, and miscellaneous articles on slavery and secession, including articles on those subjects by religious writers. Post-secession issues report on the formation of the Confederate government, the mobilization of southern military forces, and news of early battles of the Civil War. Other issues discussed include education, the construction of roads and levees, and news related to Louisiana’s sugar industry.

The Gazette and Sentinel was published weekly in four pages and semiweekly from May 15 to June 8, 1861. It is not certain when publication ceased, although it may have been at the time of Bradburn’s death in July 1864.