In 1862, fearing capture by Union forces during the Civil War, the Louisiana state legislature abandoned Baton Rouge, the state capital, and moved first to Opelousas, a more isolated and easily defended town sixty miles to the west, and then to Shreveport in the far northwest corner of the state. At war’s end, the capital was established at New Orleans, the seat of Federal forces in Louisiana, but by the end of Reconstruction in 1877, there was talk of moving the capital once again.

The Louisiana Capitolian was founded in 1879 in part to campaign for returning the capital to Baton Rouge. The paper’s founder was Leon Jastremski (1843-1907). Born in France to Polish parents, Jastremski immigrated with his family to Vermillionville (now Lafayette), Louisiana, as a child. Jastremski worked as an apprentice at the Abbeville Meridional before serving in a Confederate regiment during the Civil War. Elected mayor of Baton Rouge in 1876, Jastremski was one of the founders of the National Press Association and served for ten years as president of the Louisiana Press Association. He was an outspoken supporter of formal education for journalists.

Jastremski’s reporting initially focused on the debate over where to locate the state capital. After Baton Rouge was officially chosen in late 1879, the paper began to report on preparations being made for the legislature’s move. This included rebuilding the old state capitol, which had burned during the Civil War while being used as a barracks by Federal troops.The Capitolian combined 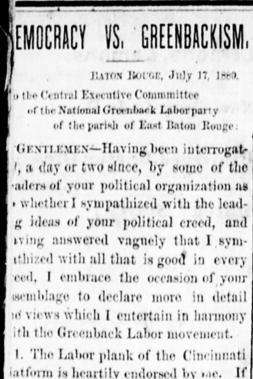 news of state government with proceedings of the town council and the East Baton Rouge Parish police jury, the governing body of the parish. Civic improvements in Baton Rouge had been much neglected during Reconstruction and became one of the paper’s main topics of discussion. It also reported in depth on local educational institutions, including Louisiana State University, the Louisiana Institution for the Deaf, Dumb and Blind, and Centenary College in nearby Jackson, Louisiana. Among other topics reported were the activities of local members the Greenback Party, which opposed a shift from paper money to a bullion-based monetary system; the so-called Exodus of 1879, in which large numbers of African Americans left Louisiana in search of a better life in Kansas; and proposed railroad connections between Baton Rouge and other towns throughout the state. Original fiction, some of it by the Louisiana Capitolian’s publisher William A. LeSueur, offers a snapshot of southern literary life in the late nineteenth century.

The Louisiana Capitolian was published on Tuesdays and Thursdays in four pages and on Saturdays in eight pages. In January 1882, it was issued for two weeks as the Daily Louisiana Capitolian. Later that month, on condition that he be designated state printer, Jastremski agreed to a merger with the Baton Rouge Daily Advocate. The resulting paper, the Daily Capitolian-Advocate, became the official state journal.