The Madison Times was a weekly, four-page Democratic newspaper published in Tallulah, Louisiana, from 1884 to 1889. Located in extreme northeastern Louisiana, Tallulah is the seat of Madison Parish. In the nineteenth century, the area was at the heart of the “Cotton Kingdom.” The Civil War and the abolition of slavery devastated the local economy, and by 1870, the population of Madison Parish, which had had one of the largest prewar black populations in the state, had dropped by forty percent. The 1880s saw an almost total recovery, thanks in part to the further development of railroads. However, according to Biographical & Historical Memoirs of Louisiana (1892), “Madison Parish has no town of any importance. Tallulah, the parish site, is the largest, having a population of 225.” Vicksburg, Mississippi, fifteen miles to the east of Tallulah, was the region’s commercial center. 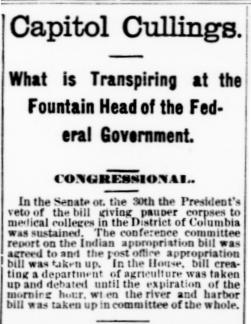 The Times’s founder was Richard Coxe Weightman (1845-1914). A native of Washington, D.C., Weightman was the grandson of Roger Chew Weightman, an early Washington bookseller, printer, and mayor. Weightman and his parents moved to Kansas at the height of the free-state controversy. His father joined a Confederate regiment during the Civil War and was killed in August 1861 in Missouri. Richard Weightman himself served under general P. G. T. Beauregard of Louisiana. At the end of the war, he moved to New Orleans and by the 1870s was working on the staff of the Times-Democrat . Weightman may have done nothing more than contribute occasional editorials to the Madison Times, for according to a later biographical sketch, he went to Washington the same year the paper was founded to serve as the Times-Democrat’s capital correspondent. The following year, he became a writer for the Washington Post , a position he occupied until 1898. 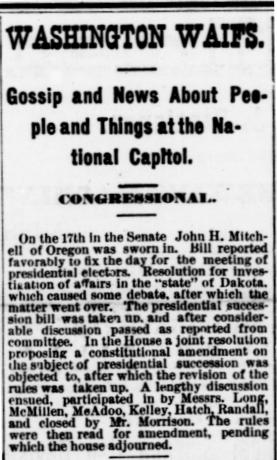 The Madison Times was established as a factional newspaper in support of Bourbon Democratic governor Samuel D. McEnery and other members of the New Orleans “Ring,” particularly U.S. Senator James B. Eustis. Weightman’s initial enthusiasm for President Grover Cleveland later became lukewarm, in part because Cleveland ignored calls (outlined in the Democratic Party platform) for the improvement of the Mississippi River, an issue of great importance to Louisiana. Other significant topics discussed include the 1884 New Orleans World’s Fair (also known as the World Cotton Centennial), immigration to the South, and the growing debate over gold versus silver coinage. The paper is rich in advertisements for businesses in both Madison Parish and nearby Vicksburg. In-depth news from Washington, D. C., was printed in columns titled “Washington Waifs” and “Capitol Cullings.” Practical advice was also available on subjects such as farming and housekeeping.

At the time of the paper’s founding, it was powerful enough to drive another Tallulah newspaper, the Madison Journal, out of business. However, in 1888, having backed the losing candidate in a local election, the Times lost its public printing contract. It was purchased by J. B. Sulder  of the Madison Item and consolidated with the Madison Journal.