The People’s Vindicator was one of the most incendiary newspapers of Reconstruction-era Louisiana. It was founded in 1874 in Natchitoches, a major cotton shipping center near the Louisiana-Texas border, by James H. Cosgrove (1842-1914). A veteran of the Confederate army, Cosgrove used verbal and physical violence in his mission to reestablish white supremacy in Louisiana and drive out northern carpetbaggers. 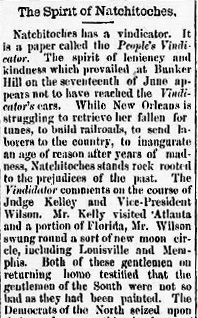 Shortly after the first issue of the People’s Vindicator was issued in June 1874, six white Radical Republican officeholders and as many as twenty of their black supporters were assassinated in Red River Parish in the so-called Coushatta Massacre. Cosgrove, who had encouraged such acts, was arrested by federal troops and briefly imprisoned. The following year, he engaged in a war of words with Republican state legislator E. L. Pierson, accusing him of embezzlement and forgery, and having his own character attacked in return. In December, Cosgrove shot and killed Pierson. Although the murderer was apparently never prosecuted, publication of the People’s Vindicator was suspended for three months. When it resumed, the paper had a new editor, George E. Gillespie. Cosgrove, however, returned as editor in June 1876.

During Reconstruction, reporting focused almost solely on politics, specifically the promotion of the Democratic party and white supremacy. Published under the motto “The Welfare of the People is the Supreme Law,” by 1879 the People’s Vindicator had declared itself the “Official Organ of the White Citizens of Red River, Sabine, Winn and Natchitoches Parishes.” 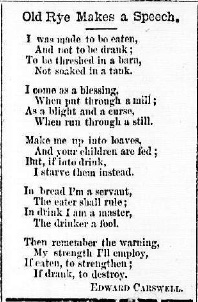 The White League, a paramilitary organization formed to intimidate both black and white Republican voters, was a frequent topic of reporting. The activities of Colonel William Levy, a prominent local Democratic leader, and his Republican counterpart, the Vermont carpetbagger Marshall Harvey Twitchell, received much attention, as did the campaign to expose two allegedly corrupt officeholders, David H. Boullt, the parish tax collector, and Henry C. Myers, a district judge. Cosgrove initially opposed the Louisiana Lottery, which he regarded as a corrupting influence on state politics and a tool of the Republican political machine. By 1879, however, he had changed his opinion and supported the lottery.

In the 1880s, political tensions died down and the People’s Vindicator reported more frequently on topics such as schools, railroads, and agriculture. Fiction and domestic advice sections were also added. The weekly paper expanded from four to eight pages at this time and claimed to have the largest circulation of any country paper in the state.

On April 19, 1881, a large portion Natchitoches’ business district, including the offices of the People’s Vindicator, was destroyed by fire. Publication of the paper resumed on June 4, 1881. Phanor Breazeale (1858-1934), a future U.S. Representative for Louisiana, succeeded Cosgrove as editor in 1882. The paper went out of business a year later when Breazeale sold the press and type to Charles Vernon Porter, publisher of the new Natchitoches Democratic Review.