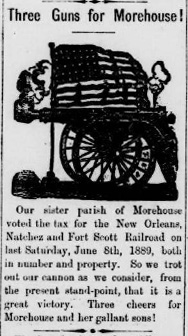 The Richland Beacon was founded in 1869 by brothers Wiley P. Mangham (1838-1896) and Thomas J. Mangham (1835-1918). Wiley Mangham began his career as a printer’s devil in Rome, Georgia, then moved in 1860 to Ashville, Alabama, where he and his brother Thomas published the St. Clair Diamond, an enterprise they both soon abandoned to enlist in the Confederate army. After the Civil War, the Manghams joined another brother in north Louisiana. Wiley worked for a time as a typesetter at the Louisiana Intelligencer in Monroe before moving to Richland Parish, a timber- and cotton-producing parish created in 1868 from portions of neighboring Ouachita, Morehouse, Franklin, and Carroll Parishes. The Richland Beacon was its first newspaper. By 1877, the journal claimed a circulation of 352.

Although Richland Parish was created through the influence of Radical Republicans and its seat, Rayville, named after the local Republican landowner John Ray, the Richland Beacon was staunchly Democratic. Published on Saturdays in four pages, its motto was “Libertas et natale solum” (“Liberty and Native Soil”). 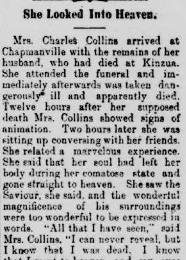 During Reconstruction it focused heavily on politics and political violence, such as the infamous Colfax Massacre of 1873. By the 1880s it had shifted its focus to agriculture and immigration, reflecting the Manghams’ interests in real estate development and progressive farming (T. J. Mangham served as first editor of the Progressive Age, founded in 1890 in Ruston, Louisiana). The activities of local granges and agricultural clubs were reported, and attention was called to the need for diversified farming and the improvement of Mississippi River navigation. The proceedings of local levee boards are also available. Women readers were offered a domestic advice column and recipes, as well as fiction and poetry, which typically made up most of the paper’s first page.