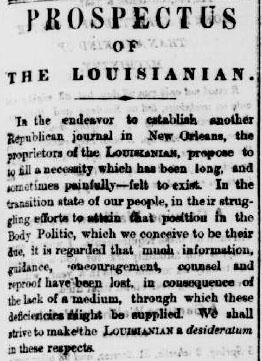 The Louisianian was founded in New Orleans in 1870 by P. B. S. Pinchback (1837-1921), a black legislator who in 1872 was elected governor of Louisiana. Published under the motto “Republican at all times, and under all circumstances,” it was one of the few nineteenth-century African American newspapers that sought both black and white readers.

William G. Brown (1832-1883) served as the paper’s first editor. Born in New Jersey and raised in Jamaica, Brown, like Pinchback, was of mixed race. He resigned as editor in 1872 to become the Louisiana state superintendent of education. His successor, Henry A. Corbin (1845-1878), was a graduate of an Ohio college. Corbin died in the yellow fever epidemic of 1878 and was succeeded by George Thompson Ruby (1841-1882), a free-born black who had worked in New England and Haiti as a correspondent for the abolitionist James Redpath’s Pine and Palm. Ruby settled in Union-occupied Louisiana in 1864 but was driven out two years later after trying to establish a school for white and black children. Before returning to the state in 1874 to edit the Louisianian, he published the Galveston (TX) Standard and served one term in the Texas state senate. In 1878, Pinchback himself became editor-in-chief but delegated most of the work of producing the paper to graduate students from Straight University, a black institution that merged with New Orleans University in 1934 to form Dillard University.

The education of African Americans was a major subject of reporting in the Louisianian. The paper reported at length on Straight University, but also took an interest in other black schools such as Howard University in Washington, D.C. It also encouraged desegregation of school systems throughout the United States. Recognizing the urgent need to educate black readers in politics, the Louisianian devoted special attention to coverage of the Louisiana state legislature and various Republican committees. Also of interest are biographical sketches of black politicians, social leaders, and educators.

Other subjects reported included immigration to the South, African missions, the activities of black Masons, and the New Orleans entertainment scene. Originally issued on Thursdays and Sundays in four pages, the Louisianian (renamed the Semi-Weekly Louisianian in 1871) was published as the Weekly Louisianian from 1872 until its demise in 1882.