The Morning Star and Catholic Messenger

Founded in 1868 as the official journal of the Archdiocese of New Orleans, the Morning Star and Catholic Messenger was the first Catholic English newspaper in the Old Southwest. Its circulation in the 1870s was approximately 4,000, of which 1,500 copies were distributed throughout Louisiana, Alabama, Mississippi, and Texas. The paper was published by the New Orleans Catholic Publication Company, a joint stock company presided over by the archbishop of New Orleans. Its motto, printed under a large illustration of the Virgin Mary, was “How Beautiful Are the Feet of Them That Bring Glad Tidings of Good Things.” 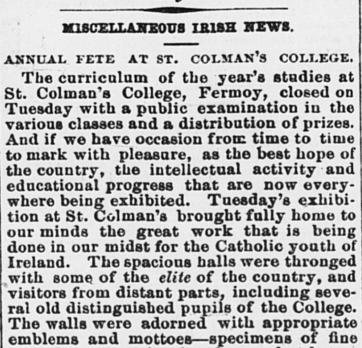 The paper’s founder, Archbishop Jean-Marie Odin (1800-1870), was inspired by Father Napoléon-Joseph Perché, who had established in 1843 of Le Propagateur Catholique, a French-language periodical that combated nativism and the anti-Catholic Know-Nothing Party, and who would later succeed Odin as archbishop of New Orleans. Odin had planned to establish an English-language newspaper around the time of his election as archbishop in 1861, but was unable to do so until after the Civil War. The Morning Star and Catholic Messenger’s primary audience was Irish Catholic. Miscellaneous news from the United States, Europe, and Ireland was combined with reports on Catholic charities, schools, and missions. Also of interest are announcements of Catholic publications, directories of churches and schools, a weekly calendar of events, pastoral letters of Gulf Coast bishops, and regular reports from the Vatican. The front page typically carried morally instructive fiction. Some issues featured advice columns on housekeeping, agriculture, and the industrial arts, with occasional obituaries and marriage notices.

Although the paper officially avoided politics, at least two of its editors held strong political opinions that were sometimes evident in their reporting. The first editor-in-chief, the Irish-born Rev. Richard Kane (1832-1873), had opposed secession and later advocated reconciliation with the North. In February 1872, Kane was succeeded by Rev. Abram Joseph Ryan (1838-1886). The son of Irish immigrants, Ryan had served as a chaplain with the Confederate army. After the war, he founded the Banner of the South, a Catholic religious and political weekly, in Augusta, Georgia. He later moved to Mobile, Alabama, where he lectured and wrote poetry in the “Lost Cause” style. Upon joining the staff of the Morning Star and Catholic Messenger, which he edited by telegraph from his home in Mobile, Ryan refused to endorse what he called “Northern Policy” and vehemently opposed racial integration. His criticism of former Confederate general P. G. T. Beauregard, a popular New Orleans native who supported integration of public schools and reconciliation with the North, won Ryan few friends. He resigned as editor in April 1875. The paper’s third editor was William Blair Lancaster (1826-1897), a cousin of Bishop John Lancaster Spalding, founder of the Catholic University of America.