St. Martinville, incorporated in 1843, is the seat of St. Martin Parish in south-central Louisiana. Settlement of the area began in the late eighteenth century by French-speaking families exiled from Acadia (Nova Scotia) by the British. Still celebrated today for its distinctive culture, St. Martin Parish is the setting of Henry Wadsworth Longfellow’s famous poem “Evangeline.” In the late nineteenth and early twentieth centuries, the parish’s most important crops were sugar, corn and cotton. Oil was discovered at Breaux Bridge in 1899, but the mainstay of the local economy has always been agriculture. Located on Bayou Teche, St. Martinville is in the heart of “Cajun country,” and the French language was widely spoken there until recent times. A cultural center, the town won for itself the name “Petit Paris” or “Little Paris.” In the nineteenth century, it was a fashionable summer resort for affluent Creole families and members of the New Orleans French opera company. 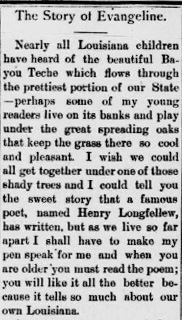 The Messenger (published after its fourth issue as the Weekly Messenger) was founded in 1886 by Albert Bienvenu (1856-1930) and George S. Eastin. Its first printer was Bienvenu’s twelve-year-old brother, Laizaire Bienvenu (1874-1953), who later became editor. Published under the motto “Justice to All,” the four-page Democratic weekly was the official journal of the town of St. Martinville and St. Martin Parish. As such, it contained reports on parish schools as well as the minutes of the parish police jury (the equivalent of county councils in other states). News of politics and political meetings was combined with reports on miscellaneous subjects, including civic improvements, the development of the local rice and sugar industries, crop diversification, drainage of swamps, and Prohibition. After about 1901, the paper reported on the south Louisiana and Texas oil booms. Although the Weekly Messenger was printed in English only, it occasionally contained articles on Cajun and Creole folklore and culture.

In 1948, the paper adopted a new title, the Teche News. As of 2010, it is still in publication and is managed by a grandson of Laizaire Bienvenu.