Abbeville, the seat of Vermilion Parish, Louisiana, was founded in 1843 by Antoine Désiré Mégret, a French Capuchin missionary. 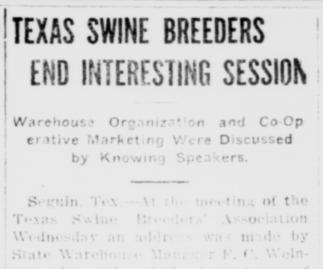 Located in the heart of Cajun country, the town’s population was initially of predominantly French extraction, with a small component of Italian and German Catholics. An immigration society was established in Abbeville in 1883 to promote the agricultural opportunities of the area. This led to an influx of Midwestern farmers who helped develop the parish’s rice-growing industry. Other important local industries in the early 20th century included cattle raising and lumbering.

John Winfred O’Bryan (1887-1943) established the Abbeville Progress in 1913. Billing itself as “A Wide-Awake Home Newspaper,” the eight-page nonpartisan weekly reported a wide range of local, national and international news. Of particular local interest is news related to agriculture, including the development of farmers’ cooperative unions, the progress of the Good Roads movement in south Louisiana, and reports on the economic and social effects of the boll weevil blight. A general agricultural advice column was supplemented by separate columns on poultry, livestock, and gardening; additionally, in 1915 the paper published a series of fourteen articles from the United States Department of Agriculture entitled “The Home Garden of the South.” A fashion column and “Progress Woman’s Page” were targeted at women readers, as was much of the paper’s selection of fiction.

The Abbeville Progress published the minutes of the parish police jury (the equivalent of county councils in other states) after it became the official journal of Vermilion Parish in 1917. It was also the official journal of the parish school board and frequently reported on local events associated with the Chautauqua adult education movement. Information on the early oil industry in south Louisiana is minimal but of some interest. News of World War I was published in a “Weekly War News Digest.”

In 1915, O’Bryan purchased John Milton Scanland’s Vermilion News and consolidated it with the Abbeville Progress. He continued as editor and proprietor until his death in 1943, whereupon the business was carried on by his wife and sons. John O’Bryan, Jr., was killed in 1944 while serving in World War II. His family, feeling unable to carry on, sold the paper the following year to the Abbeville Meridional.