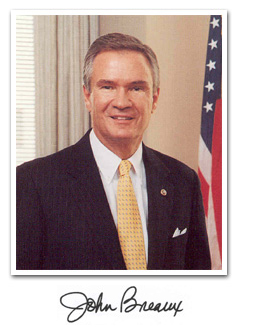 In 1972, John Breaux was elected as a Democrat to represent the Seventh District of Louisiana in the U. S. House of Representatives in a special election to fill the vacancy caused by the resignation of Representative Edwin Edwards. Upon his election he became the youngest member of the U.S. Congress at the age of 28. Congressman Breaux served on three committees and one subcommittee: the House Select Committee on Committees, the House Merchant Marine and Fisheries Committee (of which he became the senior member), the House Public Works and Transportation Committee, and the Subcommittee on Fisheries and Wildlife Conservation and the Environment (of which he was chairman). To address the problem of wetlands loss, Breaux and Senator Malcolm Wallop (R-WY) authored an amendment to the Sport Fish Restoration Act (known as the Wallop-Breaux Amendment) that increased the excise tax on sport fishing products in order to provide funds for wetlands restoration projects not only in Louisiana, where wetlands loss was the greatest of any other state, but nationwide. Breaux served in the House of Representatives for fourteen years.

In 1986 Breaux was elected to the U. S. Senate to replace the retiring Senator Russell Long. His main concern while in the Senate continued to be the preservation and restoration of wetlands, which lead to the passage of the Coastal Wetlands Planning, Protection, and Restoration Act, S. 3252 (also called the Breaux Act). The act established a fund to support wetlands restoration projects using the same excise tax strategy as the Wallop-Breaux Amendment. Since it was only authorized for ten years in 1990, Breaux introduced S. 1119 in 1999, which reauthorized the Breaux Act until 2009. Before leaving office in 2005, Breaux pushed through S. 2495 once again reauthorizing the Breaux Act and providing funding until 2019.

As a senator Breaux served on several committees including Commerce, Science, and Transportation; Finance; Senate Rules; various subcommittees; and the Special Committee on Aging, of which he was chairman. In 1996 Breaux was instrumental in the passage of the welfare reform and health insurance reform bills.

Breaux was also an important leader in the Democratic Party. In 1993 his colleagues elected him to the position of Deputy Majority Whip, which he would hold for the remainder of his career. He was also a founder of the Centrist Coalition and a founder and chairman of the Democratic Leadership Council, an organization advancing a progressive agenda for Democratic politicians. Breaux remained in the Senate until his retirement early in 2005.

Senator John Breaux (D-LA) donated his congressional papers to the LSU Libraries Special Collections in 2004. Processing of the collection was supported by a $297,600 grant from the U. S. Department of Education. Work on the papers began in August 2005, with the processing team consisting of Faye Phillips, Project Director; Phyllis Kinnison, Project Archivist; and Jacob Kimrey and Alanna Skinner, Library Associates. When the grant ended in October 2008, those working on the project included Phyllis Kinnison, Project Archivist; Robert Lay, Jr., Library Associate, and Tara Laver, Curator of Manuscripts. The materials were included in the exhibition “Two Gentlemen from Louisiana: The Congressional Papers of Senators John B. Breaux and J. Bennett Johnston, Jr.” held September 8, 2009 to January 31, 2010.