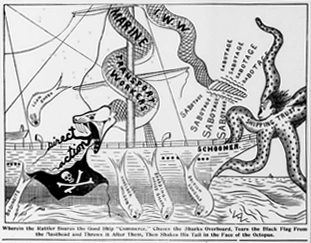 Editorial cartoons portray opinions on a mixture of social, popular, economic, and political events. Dating as far back as the Reformation (1517-1555), editorial cartoons were, and remain, a popular method to visually share ideologies to large audiences regardless of literacy. Over the centuries improvements to the printing press and engraving processes have allowed cartoonists to reproduce their work more efficiently and for a lower cost to extended audiences.

In the United States, editorial cartoonists have used metaphor and caricature to comment on a variety of political and social issues. Widely regarded as the first American editorial cartoon, Ben Franklin published his iconic “Join or Die” cartoon in his Pennsylvania Gazette in 1754. This popular image depicts a snake cut into eight pieces, representing the division of the colonial governments. The cartoon was well-received by likeminded colonists and has been reprinted and reproduced in countless newspapers years after its original publication. Despite the popularity of this image, the American editorial cartoon did not become an established newspaper feature until the 1890s with the addition of Sunday editions, increased coverage of heated political debates, and most importantly, the development of the syndicated cartoon. These syndicated cartoons are provided from external organizations which allow reproduction in multiple newspapers throughout the country. 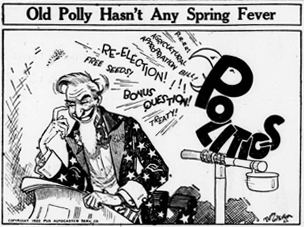 The following editorial cartoons highlight significant themes and events that occurred during the volatile years 1914-1922. These include the U.S. becoming the world’s dominant agricultural and industrial power; the explosive growth of U.S. armed forces during its involvement in the Mexican Revolution (1910-1920) and the Great War (1914-1918); the spread of nationalism and xenophobia; the presidencies of Woodrow Wilson (1913-1921) and Warren G. Harding (1921-1923); the escalating conflict between labor groups and capitalists; escalating international conflict; and the climax of the woman’s suffrage movement with the passage of the Nineteenth Amendment in 1920. These themes and events foreshadowed the culturally dynamic Roaring Twenties and the subsequent Great Depression.

For a closer inspection of each cartoon, click on the images to open the newspaper issue in Chronicling America.