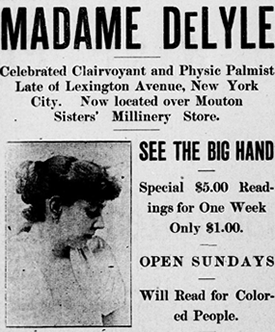 1840s - Spiritualism movement gains traction as disconent with traditional religious organizations grows
1848 - The Fox sisters of Hydesville, New York attract thousands of followers and spark the modern spiritualist movement by claiming the ability to communicate with the dead. Hundreds of clairvoyants, palmists, and spirit guides begin popping up across America as the spiritualist movement’s popularity spreads.
1888 - The Fox sisters confess to fraud but later recant their confessions
1890 - Approximately 45,000 Americans identify themselves as affiliatesd with a spiritualist society