The Lafayette Advertiser was founded in 1865. At that time, the newspaper’s title referred to Lafayette Parish, not the city of Lafayette, which was called Vermilionville until 1884. 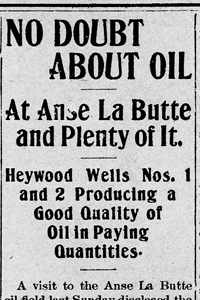 Located 15 miles west of the Atchafalaya Swamp and 35 miles north of the Gulf of Mexico, Lafayette is part of Acadiana, a region settled in the 18th century by French colonists driven out of Nova Scotia during the French and Indian War. In the 19th century, most immigrants to the region came directly from France or other parts of the United States. The population of Lafayette was about 3,000 in the 1890s. By 1910, this had more than doubled, due in part to the opening in 1900 of the Southwestern Louisiana Industrial Institute (now the University of Louisiana at Lafayette). Several sugar factories appeared around the turn of the century, contributing further to the town’s growth. Natural gas was discovered at nearby Breaux Bridge in 1899, followed by oil at Anse La Butte in 1902.

William B. Bailey (1839-1896), a Lafayette native who had trained as a printer with his brother Abijah Bailey at the bilingual Echo of Lafayette, became a partner at the Advertiser on his return from the Civil War. He was its sole editor and proprietor from 1868 until 1893, when he accepted a political appointment. The paper was then edited briefly by Alfred C. Ordway before coming under the management of its associate editor, Henri A. Vander Cruyssen (ca. 1859-1903). Born in Ghent, Belgium, Vander Cruyssen trained and worked as an architect in his native country, but switched to the drug business prior to immigrating to New Orleans in 1884. He later settled in Breaux Bridge, near Lafayette, where he ran an apothecary shop and edited a newspaper, L’Union de Pont Breaux, before taking over the Lafayette Advertiser . The paper changed hands again in 1903, when it was purchased by Wesley A. LeRosen (ca. 1864-1935) and A. James Alpha (1880-1948). It continued as a weekly, then as a semiweekly, and after 1914 as the Daily Advertiser. 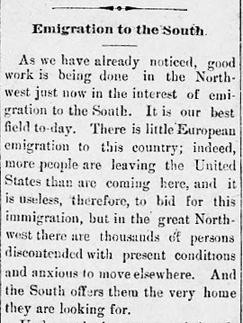 Democratic in its political leanings, the Advertiser spoke out against Radical Republican rule during the era of Reconstruction but maintained a “conservative” (i.e., moderate) political view and discouraged political violence. Bailey devoted much space to promoting local businesses and resources, advocating for internal improvements and immigration to the region. In the 1870s, the paper featured articles in both English and French, usually with entirely different content for each language. The French articles were often of high literary quality and focused on topics such as the instruction of girls, the use of the French language in Canada, the legacy of the Revolution of 1848, the Franco-Prussian War, and Jefferson Davis in Paris. Many were reprinted from La Renaissance Louisianaise, L’Abeille de la Nouvelle-Orléans, and other French-language journals. The Advertiser had become English-only by the late 1880s, but French content was fully restored during the ten years that Henri Vander Cruyssen served as editor.

Under Bailey’s management, the Advertiser’s English-language articles tended to be brief editorials and personal announcements from throughout Lafayette Parish. The balance of the paper was cobbled together from other sources. Local reporting increased dramatically in the 1890s and early 1900s, due in part to the opening of the Southwestern Louisiana Industrial Institute and the Texas-Louisiana oil and gas boom. LeRosen, at one time the principal of Lafayette High School, was an especially outspoken advocate of education in Lafayette Parish.