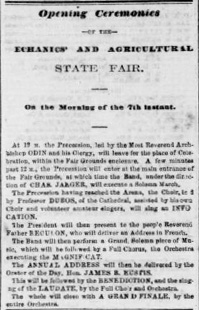 The New Orleans Crescent was founded in 1848 as the Daily Crescent by Alexander H. Hayes (d. 1866) and J. E. “Sam” McClure, both formerly of the Daily Delta . In 1848, poet Walt Whitman co-edited the paper but was fired after few months because of his antislavery views. He was replaced by William Walker, the famous filibuster who in the 1850s led several private military expeditions to Central America in an attempt to establish an English-speaking, slaveholding empire. Reorganized as the New Orleans Daily Crescent in 1851, the paper was purchased in 1854 by James Oscar Nixon (1822-1891). A native of New Jersey, Nixon moved to Louisiana as a teenager and worked in the clothing business. In 1850, prior to taking over the Daily Crescent, he purchased the militant Weekly Crescent from John Wesley Crockett (son of Davy Crockett), a paper he eventually aligned with the Know-Nothing Party. During the Civil War, Nixon served as lieutenant colonel of a Louisiana cavalry regiment, was taken prisoner, and then paroled to the home of his brother, a prominent banker, in New Jersey. In his absence, publication of the Daily Crescent was suspended by military order following the Federal capture of New Orleans; it did not resume until October 1865. In 1866, the word “daily” was dropped from the title, though the paper continued to be published six days a week in six to twelve pages. A weekly edition, the Weekly Crescent, was also published. 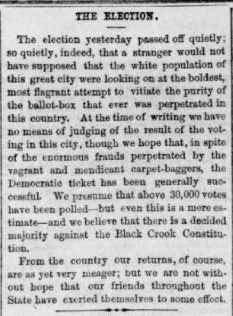 Postwar issues of the New Orleans Crescent were politically moderate but freely criticized political leaders. In the presidential election of 1868, Nixon endorsed Democrat Horatio Seymour of New York and was critical of Republican Ulysses S. Grant. In the late 1860s the paper, which had been strongly proslavery before the Civil War, discussed the social and political implications of a free black population. Other major issues reported include the control of yellow fever, the regulation of prostitution, and the construction of roads, railroads and levees. Much of the paper consisted of commercial news and advertisements. Also available are announcements related to schools, academies, social clubs, and fraternal organizations.New Orleans was one of the few southern cities that played a significant role in the development of American sports; Nixon and his staff were particularly interested in horse racing but also reported on baseball and the activities of sporting organizations such as the elite Southern Yacht Club, of which Nixon was a member. The local theater and opera scene is also well documented.

The New Orleans Crescent was the official journal of the state of Louisiana and the city of New Orleans. Publication ended in 1869 when Nixon sold the enterprise to Charles A. Weed, a Connecticut businessman and publisher of the New Orleans Times. Founded in 1863 as a Unionist newspaper, the Times had taken over the Crescent’s printing plant during the Civil War.